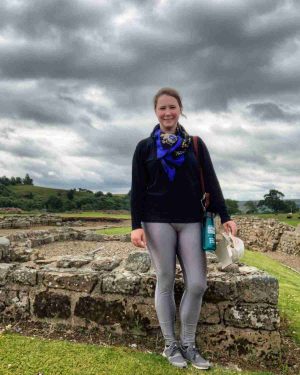 As you may imagine, the end of a year spent jobless and rootless and wandering around the world as a solo female traveler was often a time for soul-searching. And when I forgot my existential worries briefly over a Scottish scone with my sister or on a drowsy train ride through the north of England, some kind soul on the train/Instagram/literally anywhere would pipe up, “so what’s next?”

Contents hide
What’s next?
The traveling must go on but it also must end
Why take the Hadrian’s Wall walk?
Heading off to walk Hadrian’s Wall
The simple life
A comforting rhythm to long lonely days
Same same but still satisfying
Finding my future

That question haunted my insomniac nights in Ireland and my mid-day musings over my pot of tea at London’s Fortnum & Mason and the long walks I took around the streets of Budapest.

It didn’t help that my last month was a blur – going from Boston after my cat died to Budapest for a few short lovely days, to Ireland to spend much-needed rest time with my brother and his fiancée and kids (the best cuddlers), off to Dublin to meet a college friend for Bloomsday, four days staying in a barn on the peaceful Isle of Man, nine unforgettable days in Scotland with my sister, a casual walk across Britain along Hadrian’s Wall, and then my final four days in London.

Even writing that makes me tired.

The traveling must go on but it also must end

But I pushed on through my sadness and the whirlwind of constant packing and the slow death of my remaining clothes and the mental and physical journeys.

It wasn’t all exhaustion and sadness though – the moments of beauty shone through even as I was sleepless at 4 am in my Budapest hostel, wondering if I should have even gone on with this trip or just stayed in familiar Boston.

The beauty came as I soaked my plane-aching body in the thermal baths of Budapest, as my nephew told me firmly over our last breakfast “you don’t go today, you can go next week”, as I drank Burgundy at Davy Byrne’s in Dublin with Kasey and her wife sang with our brand new friends, as I held a tiny tail-less Manx kitten in the fading summer sun, as my sister and I biked around the tiny Scottish island our ancestors came from.

I chose to do this at the end of my trip because I decided I needed to mark this transition, to give myself something meditative to do, to think about this incredible year of traveling alone as a woman to 24 countries and 4 continents and infinite places in my mind. And nothing does that for me like a walk.

So I took a really long one.

Why take the Hadrian’s Wall walk?

I could tell you about my love of ancient history (true!) especially the Roman Empire (I studied Latin!) and how that was the deciding factor. Hadrian’s wall isn’t actually much of a wall these days though. It’s more like some disconnected segments of bricks high enough to trip over. And along the 85 mile walk, there are only 11 miles of wall remaining, mostly in the middle. O, it was beautiful anyways.

But really, I chose this particular walk because I googled “flattest walks in Britain” one night in a hostel bunk in Croatia and that’s what came up. I am infamous among my family and friends for my dislike of hiking, but it’s not the physical effort that I shun. It’s the heights – I have vertigo and very small feet and I don’t like wobbling about on mountains. Ask me about the time I hiked Mt. Washington and how much I cried (so much, so very much).

So I thought, England is a flat country, yeah? And they have loads of good walks, which I know from reading lots of Bill Bryson’s books about England. He’s always having lovely rambles in the countryside and then drinking in quaint pubs and breakfasting well (he nearly always breakfasts well which is a quality I admire in a person).

So maybe I could find a nice long flat one and be fine. Plus, England does not have much in the way of real wilderness or wild animals, which is comforting when you’re planning a walk alone as a woman.

In America, you can encounter all manner of large fierce mammals – bears, wolf-coyote hybrids, mountain lions – while you’re out getting the morning paper. In England I think cows are their most deadly animals and they kill about three people a year, so I felt pretty secure. (I did spend a night googling how to behave around cows so they won’t trample you to death though. How did we ever answer our strange and anxious questions before the internet?)

Heading off to walk Hadrian’s Wall

So after some light prep – booking bunks at farmhouses, buying Compeed blister packs and some mixed nuts – I was off. I was mildly underprepared and I looked a bit different from the serious hikers in my sewn-together sneakers and my Longchamp backpack, but the weather was sunny and my mood was high. Maybe this slightly crazy idea – walking Hadrian’s wall alone as a woman – was also going to be a great one.

I knew it would probably be beautiful – the hills and moors and crags of England’s northern bits, foxes gallivanting through the summer wildflowers, glimpses of the wall itself still standing nearly two millennia after its construction. And it was all that and more.

Thick walls of trees down a shady and deserted lane with fat warbling birds peeping away in the hedges, butterflies that floated over the fields heavy with new wheat, silent still ponds and lakes broken only by the beak of a curlew fishing for dinner.

But despite the effort of my feet – walking 5-17 miles a day is no joke – my mind felt new and clear and free somehow.

For the first time in a while, all I had to think about were very simple matters.

Wake up. Eat a giant farm breakfast – homemade bread and yogurt, bacon I still dream about, the freshest eggs. Walk until I reached the one place serving food along the way. Sit down. Enjoy how amazing it feels to sit down. Eat a (probably rather terrible) lunch, drink tea. Get up again. Walk until I reached my bed for the night. Eat a (moderately more edible) dinner. Drink one pint of generally good beer. Take a heavenly shower that felt like tears falling from angels in heaven. Sleep like an actual moss-covered log for nine hours.

Traveling alone is full of benefits, but also of tough decisions you have to make on your own. Where to go next? How to find that bus? Go out or stay in? Socialize or hibernate? Coffee or tea? The decisions get exhausting after a while. And when you’re near the end and the questions come fast and frequently (what’s next what’s next what’s next), the burnout is real.

So I just walked.

The plan wasn’t exactly the same every day. The last two days of my walk, the lunch spots were closed, so I crammed a protein bar into my mouth and carried on. One day I started late in the morning to visit the Roman fort of Vindolanda, well-preserved and full of information.

And my lunches varied from excellent (a hipster pie and ale shop in Newcastle where I had the most heavenly rhubarb oat cask ale) to dire (a baked potato topped with unmelted shredded cheese and mayo). I was in a new bunkhouse every night, and a hotel once which was heavenly luxury – the first time in weeks I’d had my own bathroom.

You can read the day to day details of the Hadrian’s Wall walk in this post.

But overall my days had a pleasingly physical sameness. I ate, I walked, I ate, I walked more, I ate, I slept. I did it again. I focused on getting from point A to point B without getting trampled by a cow or slipping in cow shit, and I focused on appreciating the beauty along the way.

I met kind strangers everywhere who cheered me through mud puddles the size of a small apartment and stairs so tiny only a cat could fit on them and a day of constant rain in my wet flimsy shoes.

I ate shitty food (I now understand why people say British food is so bad) and I didn’t care, because I was hungry. I slept soundly in creaky old farmhouse bunks, because I was tired. I didn’t even have to decide where to eat lunch – there was one option if I was lucky. Limited choices means less stress, sometimes.

I couldn’t think too much about my life and my future and my worries, because I had to avoid falling off those crags and look out for the upside-down acorn signs that marked the path. And I was too exhausted at night to do any 3 am panicking, a luxury in itself.

But slowly over the course of eight days of walking and listening and breathing, I felt more clarity and certainty drift into my mind like the clouds drifting over the moors in the breeze. Just clean clear thoughts in the brilliant air.

And just like that, I knew I wanted to keep going. Not just on the walk, though I’ve fallen in love and I plan to do so many more. But traveling alone, this rootless and exciting life full of new things, was still my path for now. I missed a few things about being settled – having more than three outfits, having clothes without holes, my stacks of favorite books, my friends and family around me.

But I didn’t want to go back to my old corporate job, or living in Boston, or really any part of my old life for now. I wasn’t filled with loathing for that life – it just didn’t fit me right now.

So I finished my walk and ended my trip. But the adventure didn’t stop there.

2 thoughts on “Take a Walk: How to Sort Out Your Life On Foot on Hadrian’s Wall”