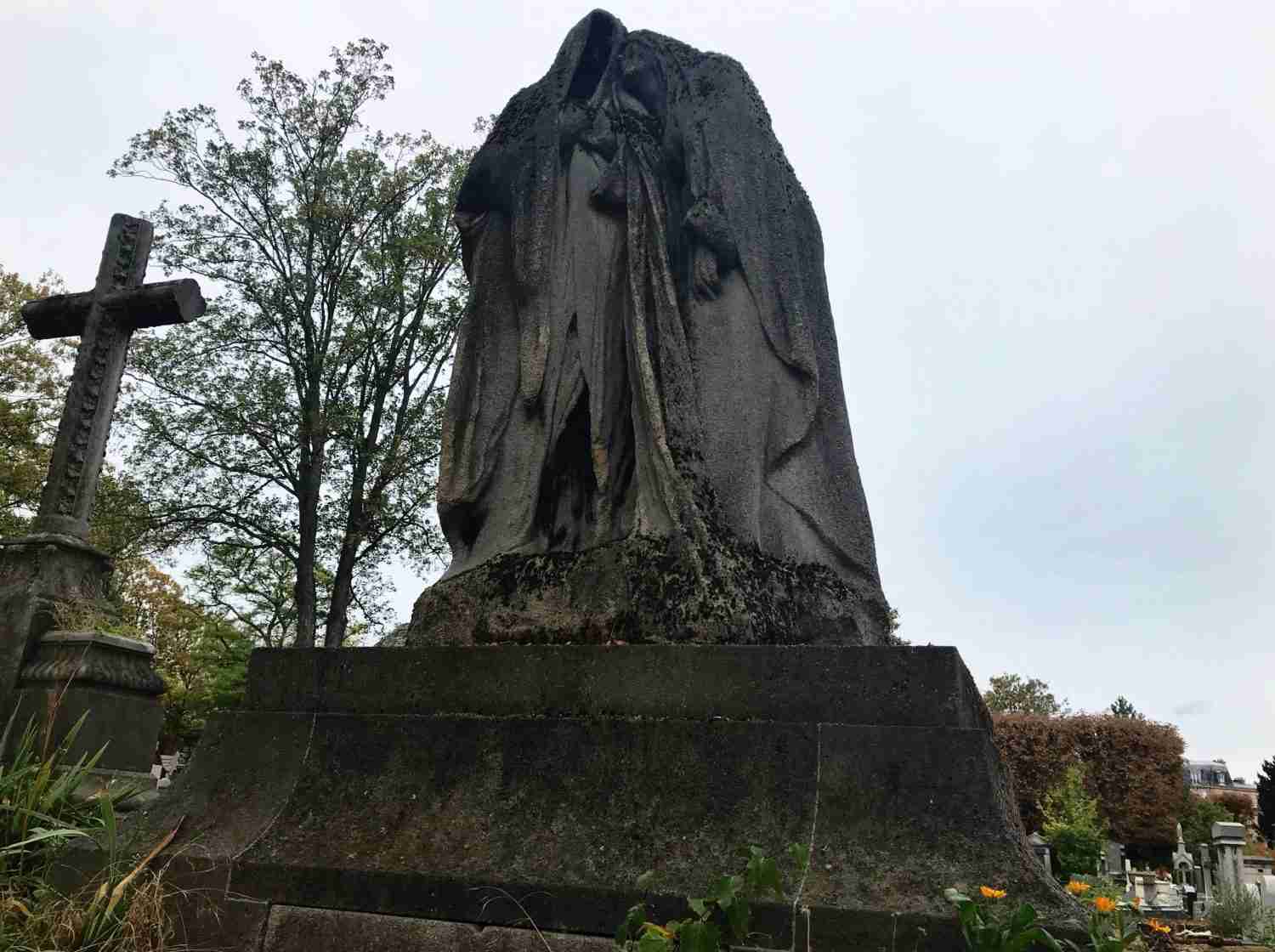 I’ve always had an affinity for slight macabre things.

When I was little, I loved going to see the mummies at the Museum of Fine Arts in Boston. Now as an adult, one of my favorite things to do is strolling around cemeteries. Mount Auburn in Cambridge, tiny famine cemeteries in tiny Irish towns, or the one in Copenhagen where you can visit Soren Kierkegaard’s grave are a few of my favorites.

Père Lachaise in the 20th arrondissement of Paris is perfect for this. It’s a big pocket of quiet in my busy quartier, full of tall trees that entwine at the top to form graceful tunnels through the winding trails.

The graves themselves are beautiful to look at as well. Many of the family sepulchers have stained glass windows at the back, and you can get a glimpse of them as you wander.

With its beauty and history, you can see why many artists and writers from across the globe have chosen to be buried here. Like Oscar Wilde’s tomb, above. Their graves are often the simplest, with the grandest ones belonging to names that have been lost to history. (This is not true of Wilde, whose tomb looms as large and splendid as his personality).

Something felt very right about visiting Proust’s grave on the day I (finally! 12 years later!) finished the first volume of his 3,000 page work In Search of Lost Time. It was incredible and I’m going to Shakespeare & Co this week to buy the next volume.

I tend toward occasional moods of gloomy neuroticism. Well, the neuroticism is constant but the gloom comes and goes. Today the sky was grey and the rain was spattering the sidewalks and the gloom descended upon me. I love cities that let me indulge that side of myself. I haven’t found many American cities that are like that, we’re too cheerful as a nation (at least outwardly) to really give full reign to our darker moods.

Paris, on the other hand, is perfect for those moods (I found the same feeling in Copenhagen, those Danes know how to brood sexily!). It’s put perfectly by the amazing show Crazy Ex-Girlfriend which features a song literally called “Sexy French Depression“.

No one here tells you things that are supposed to be comforting, like “it’s not that bad! chin up!” They nod in agreement about the terrifying fact that we are tiny specks in a large and impersonal universe, and they basically perfected turning that angst into beautiful philosophy and art. You’re in good company wrestling with those questions here in the land of Sartre, de Beauvoir, Camus, and Weil.

And somehow sinking down into that darkness for a bit and visiting a whole bunch of dead people has made me feel cheerful again. C’est la vie!

1 thought on “Solo in the Cemetery: Wandering Paris’s Pere Lachaise”