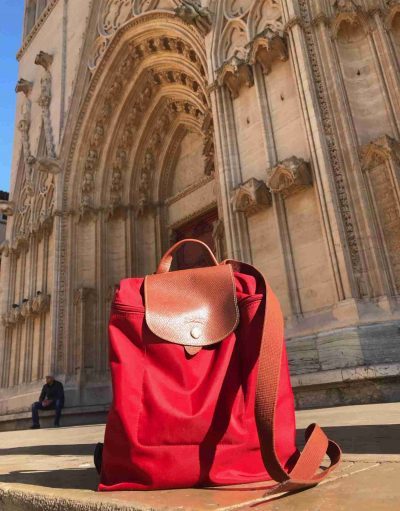 On my way out of France, I have been meandering through two of its beautiful cities! I spent two days in Dijon, and three in Lyon (with Burgundy sandwiched in between like creamy salted butter on a baguette). Dijon was small but beautiful: full of medieval buildings and churches like the ones pictured above.

I stayed in a little nest of an AirBnB above the rooftops of the city, and watched the sun rise over the many church steeples every morning. It was pretty, but part of my was irrationally sad it wasn’t Paris. Travel feelings are weird sometimes. I’m not really a small city girl: give me total isolation or a giant metropolis please.

After leaving beautiful Burgundy, I headed to Lyon to finish out my time in France. And when I got here, I was pissed. At the city for not being Paris, at myself for booking too rigidly so I couldn’t stay longer in Burgundy, at every tacky Gucci belt I saw (you’re not fashion bloggers! Those belts are ugly!). Then I came to my senses and realized: So I took a deep breath, opened my heart and my mind, and it turns out I really liked Lyon. More than Dijon, as it turns out!

Lyon was a very important center in Roman times, and they have a fabulous Gallo-Roman history museum and ruins of of an old theater and stadium you can clamber all over. You know I love my ancient history, so this was incredible.

In the center of Old (Vieux) Lyon, renaissance buildings are flanked by gothic cathedrals and cobblestone streets and passageways called traboules, which the city’s silk merchants used to transport their wares safely in the rain.

And the food! Lyon has a reputation for having the best food in France and I won’t disagree (although they love tripe, and I have actual tripophobia so that was a no from me). Fish soufflé in lobster sauce though? Salade Lyonnaise which is bacon and bread on some greens? Yes please.

Learning to be open

Ok, so I was not open to eating tripe (or veal head). But I did make a conscious effort to push through my initial emotions and see what I could find here, and I ended up enjoying the outcome. I even ended up enjoying my hostel, which I was not eagerly anticipating after two night in an actual castle. I’m not planning on being as open as this dude, because I generally wear clothes. But these stopovers were a good reminder to me that emotions hit you on the road just like anywhere else. You can’t change them, but you can change your reaction.

Sometimes you just need to take a breath. And then your eyes open to something wonderful and unexpected.

2 thoughts on “Dijon and Lyon: On Learning to be Open”