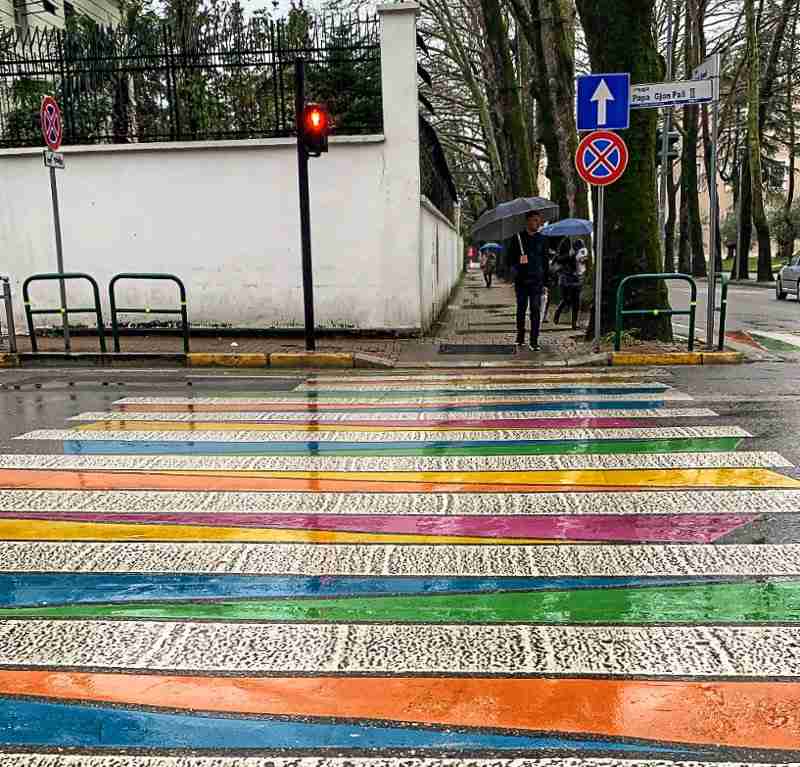 Tirana, Albania is an under-the-radar but growing digital nomad hub. Thanks to very generous visa rules for Americans and many other nationalities, the low cost of living, and the convenient location on the Adriatic Coast, I think many more people will soon be living the Albania digital nomad life in the next few years.

Here’s why I loved it, and what you need to know if you’re thinking of heading there to live and work remotely for a few months.

The low cost of living in Albania is certainly one of the biggest draws to the country for digital nomads. It’s one of the cheapest countries in Europe to live in.

During my stay, I paid under $200 for two weeks in an Airbnb in a great central location. A macchiato in a chic cafe in Blloku, the coolest part of the city, costs just $.83. A beer is only about $1, and you can have a multi-course meal at a lovely restaurant for under $15.

Those prices really can’t be beat, at least not in Europe! And they make living in Albania as a digital nomad very affordable.

However, there is at least one reason the cost of living in Albania is so low – it’s really undeveloped. Arriving in the shiny new Tirana airport gives a gleaming impression of the city, but really it’s more like being in Southeast Asia than in Europe. Some streets in Tirana are unpaved, the houses are often cobbled together out of a mix of materials, and the poverty rates are much higher. You shouldn’t drink the tap water, and there’s really only decent hospital in the whole country.

This underdevelopment also makes getting around the mountainous country more challenging than in the rest of Europe. There aren’t actual buses once you get outside of Tirana – and even the bus I took to the airport in the city was decades old. Instead, you hop into a series of unmarked vans that whisk you around once they’re full to your final destination.

If you’ve traveled a lot in Southeast Asia, you’lll find all of this familiar. But if you’re a relatively new traveler who hasn’t been anywhere too adventurous yet, I’d consider carefully before you head to Albania. You might well love it – just be prepared!

Despite the lack of advanced development, Albania is a safe place to travel, even for women traveling alone. In fact, I found that Albanians were some of the warmest and friendliest people I met in Europe. While you do need to be aware of the possibility of petty crime in highly touristed places, this is true anywhere in the world.

Albania often gets a bad safety reputation because of its poverty, but poverty and crime do not always go hand in hand. Also, American movies love to portray Albanians as hardened criminals for some reason – the kidnappers in that silly Liam Neeson movie Taken are Albanians, for example. But that movie is not real life! And as long as you take the same basic safety precautions in Tirana you would take anywhere else, you’ll be just fine.

It’s easy to stay there long-term.

For digital nomads in Europe who are tired of picking up and moving to a new country every three months, Albania offers an incredible benefit to Americans: you can stay for a year visa-free just by arriving in the country. If you’re looking for a rest from the constant movement, Tirana can be a good base.

This doesn’t apply to all non-European nationalities, so if you’re not American you need to do more research to determine if this applies to you too. But for us Americans, this is a really cool benefit.

Many countries in Europe are beginning to offer one-year digital nomad visas, like Croatia and Portugal, but those come with lots of terms and conditions and can take months to process. In Albania, on the other hand, you just show up and get to stay automatically.

Albania is located near two of my favorite other digital nomad destinations – Greece and Croatia. In normal times (and hopefully again post-pandemic), flights out of Tirana connect Albania easily with most of Europe. And since Albania isn’t in the EU or the Schengen Zone, it’s a good destination if you’re looking to stay in Europe legally longer than 90 days and have run out of Schengen time.

Plus, Albania offers many different scenes within one country – the big urban excitement of Tirana, the seaside resorts of Sarande, all the ancient Roman ruins, and plenty of nature and hiking as well as the sea to get outdoors.

The Logistics of Living in Tirana, Albania as a Digital Nomad

Now that you know why Tirana is a tempting digital nomad city option, what do you actually need to know about living here?

Within Tirana, the neighborhood to live in for digital nomads is definitely Blloku. It’s young, cool, and full of chic cafes and beautiful restaurants. This is where the nightlife happens, but you can also find quieter spots a 5-minute walk from the neighborhood if noise is a concern. It’s also a central location where you can easily explore the rest of Tirana.

Albania is a mostly cash-based society, and they have their own currency – the Albanian lek. I was able to pay my transfer van driver from the airport in euros as arranged beforehand. But then I had to hit up an ATM right away since I couldn’t pay for almost anything else with a credit card, even in nice restaurants.

The only place that accepted cards was the grocery store around the corner from me. Cash is king here. As I always do, I looked for an ATM attached to a bank to be sure I was getting a decent rate and to avoid the risk of card skimming.

Tirana is full of beautiful cafes with plenty of space and pretty decent wifi, so that’s where I set up to work at my job as a freelance writer when I was there. Can’t beat those $.83 macchiatos! I especially loved working at the gorgeous City Art cafe, as well as Sophie Caffe.

But if you want a more formal space for working, be sure to check out the coworking space options in Tirana. Coworking spaces are one of my favorite ways to make new friends (and even find dates!) as a digital nomad.

What Else You Need to Know

Albanians speak a unique language – it’s called Shqip, and there is no other language like it. That means unlike the rest of the Balkans, your Croatian or Serbian or Greek won’t get you far here. I found Albanians spoke a fair amount of English and were very accommodating to my non-Albanian-speaking self, so I didn’t have much trouble getting around. But English is not as widely spoken as in Croatia or Greece.

I bought a very cheap SIM card at the airport so I’d have phone service in Albania, and it was well worth it – only a few dollars for a month of data. Also I left my passport (!!) with the woman at the Vodaphone desk after making my purchase, and she kindly chased me down through the airport so I didn’t leave without it! Seriously, they’re a very kind people.

Why You Need to Try Albania Digital Nomad Life

Extremely inexpensive cost of living, super friendly people, a fascinating history, and a whole variety of landscapes and sights to explore – what more could you want from a digital nomad destination? And Tirana, Albania has all of that and more. I can’t wait to get back soon! 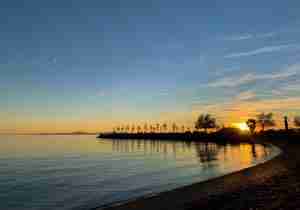 The Best Month to Visit Croatia 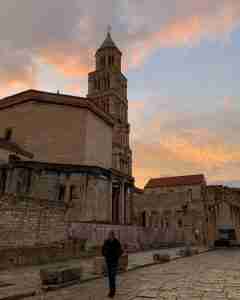 The 8 Top Croatia Travel Tips You Need to Know 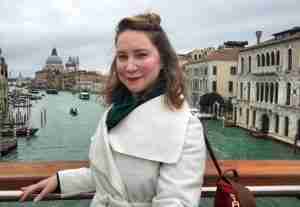 The 5 Best Books to Read Before Going to Italy 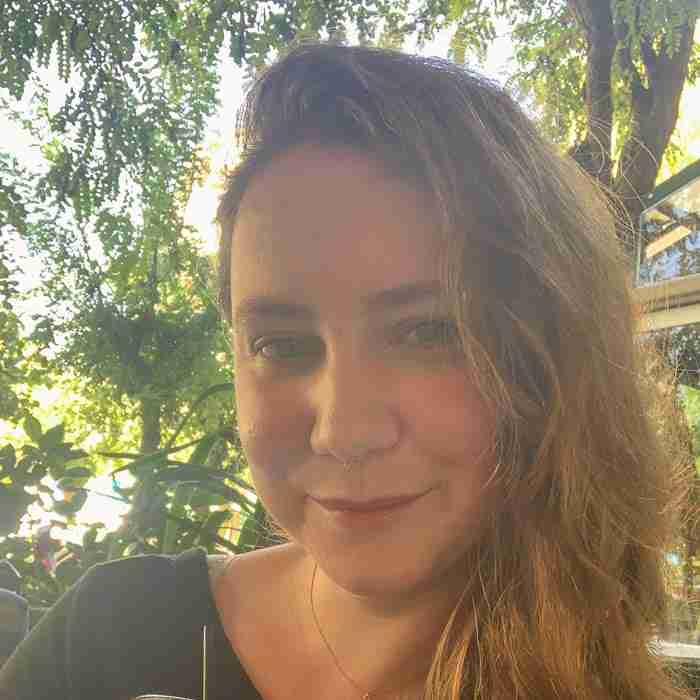