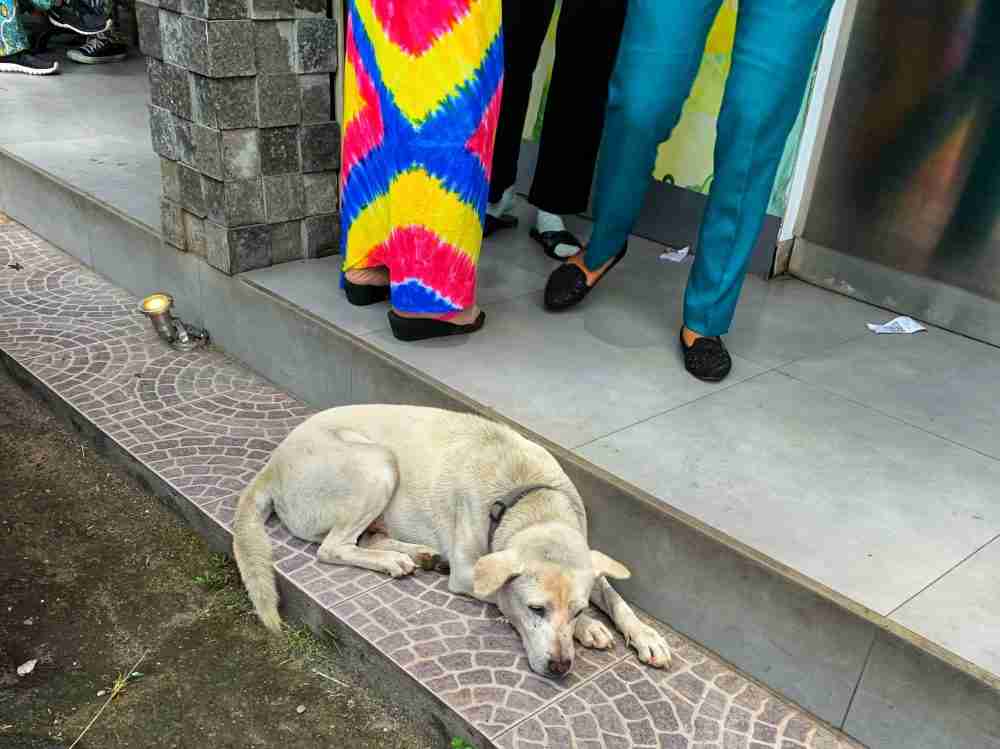 Southeast Asia is full of stray dogs and loose dogs, curled up alone sleeping on the sidewalk or roaming at dusk in silent angry packs. I’ve never seen so many of them before. Fat sleepy-eyed dogs roamed everywhere in Greece, and hungry-eyed ones prowled in Bulgaria with their skin pasted onto their ribs. But there were two of them for every ten dogs here.

Walking in a quiet woods as a little girl, a “friendly” dog (that’s American for uncontrolled and untrained) jumped on me and knocked me to the ground. Since then I’ve feared dogs I don’t know, which is nearly every dog in the world. Once I get comfortable around one I can relax a bit.

But even then I’m not overly fond of them. Sticking their noses in your ass and then in your face, all the drooling and jumping and vomit-eating and their transparent desire to please (but not enough to remove their faces from my crotch, apparently). It’s too much. I’m an unapologetic cat partisan – neat, independent, self-respecting and self-contained animals.

It’s not just the memory of that long-ago jumper that makes me recoil. The dogs here are often vicious. A pack of them just put a 7 year old in the hospital on a nearby Thai island. There are tens of thousands of dog bites in Bali every year, and a rabies epidemic starting in 2008 killed hundreds. Dealing with the dogs on every corner is one of my biggest struggles here.

So the loose prowling dogs in every city and town here freak me out and then piss me off. Why is it okay to let dogs roam free and fertile here? Lolling on a lounger on the Koh Phangan beach, a pit bull sidles over and sticks her nose in my face. Then she decides I look friendly and curls up under my chair. WE’RE NOT FRIENDS, I want to shout. But of course dogs don’t speak English (another failing of theirs in my book).

So I stalk angrily off the beach, irate at whoever let her out to interrupt my Rachel Cusk novel.

All this dog-related fear and loathing puts a lot of strain on my neck and shoulders. Fortunately finding a massage here is like finding a Dunkin Donuts in Boston – two on every corner and cheap to boot.

For $6-10 (sometimes cheaper if you’re not as picky as me) I get an aromatherapy facial, an hour of nearly brutal massaging, a foot rub painful but so good I nearly cry. Sometimes I splurge for $20 in Bali and get a head-to-toe scrub with my massage, followed by a flower bath where I eat cookies and soak in my basic bitch life.

Being on the road is tough on my body and my beauty regime. All that time squeezed into hot buses built for tiny Thai people and trekking over crumbled sidewalks in my Tevas is not glamorous. Spas offer a quick escape into a calm and perfumed world where my worries are sloughed off like your dead skin under a green tea scrub.

But I realized today as a solemn Balinese woman prodded my scalp exquisitely that spas offer so much more. Long-term solo travel has exposed the many ways I encounter loneliness. Getting sick alone in Laos, celebrating Thanksgiving alone in a Bulgarian restaurant, drinking champagne alone at the Ritz in London on the eve of Christmas Eve surrounded by families.

I wasn’t anticipating the physical loneliness too. At home even in undemonstrative Boston, I get hugs from my friends and snuggles from my cat and hold hands with my nieces as they toddle around. Out here that’s all gone. I do occasionally cadge a moment of communion with a street cat, but even the friendliest don’t nestle into my shoulder like my Seth does. Hugs with new friends happen mostly with goodbyes, opening my arms to sadness.

Massages don’t fill this need for contact in a vulgar way, though my Cambodian and Balinese masseuses were very attentive to my ass. That was both ticklish and uncomfortably intimate. But just having another person caress my head or rub my feet, even if I’ve paid them to do it, reminds me of the comfort of human touch for a moment.

Maybe it’s what those stray dogs are looking for too. A little pet on a hard day, a careful combing when your fur gets too mangy, a place to rest your small cracked paws and close your eyes. Being a stray dog isn’t that different from being a traveler. We have total freedom – both an exhilarating and lonely sensation. We’re always on the alert for speeding scooters, desperate for a nap, prowling alleyways for our next meal in a place where that might be beautiful but isn’t home, a place where we don’t really belong.