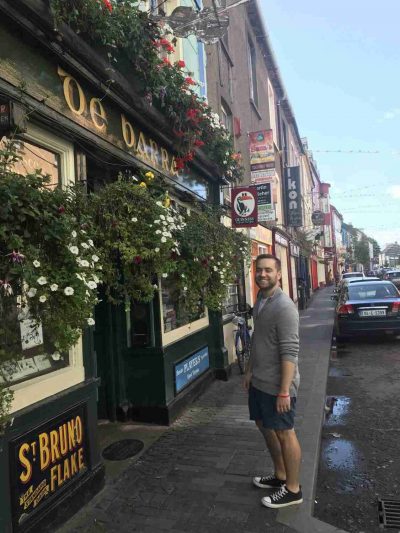 If you’re planning a trip to Ireland soon, or just dreaming of seeing her green hills and adorable pubs someday, you can prepare for your travels from the comfort of home by picking up a book or two. Ireland is a country I know well and visit often – so here are my five favorite books to read before visiting Ireland!

This post may contain affiliate links. By booking through these links I may make a small commission (which I am very grateful for!) at no additional cost to you.

1. We Don’t Know Ourselves by Fintan O’Toole

This is a stunner of a book – one of the best books about Ireland, in fact. O’Toole is a versatile writer and explains through his own personal history on the island how Ireland became the nation it is today.

You’ll come away with an understanding of Ireland’s past as well as where it’s headed. And O’Toole is always a sharp, beautiful, often funny writer, so it’s an enjoyable read as well. No wonder my brother Rob (a writer who lives in Ireland!) absolutely adores him, which is a very strong recommendation indeed.

You can’t talk about Irish writers without talking about James Joyce. He had a tormented relationship with his native country, but no one can beat him for sheer beauty of language and a loving but piercing look at the culture that shaped him. Of all the books to read before traveling to Ireland, put this one high on the list.

Dubliners is a series of short stories following various inhabitants of the city, illustrating different viewpoints and realities. This is the best way to dip your toe into his writing before going to Ireland.

I have been a lover of Joyce’s writing since my college days, when I read the entirety of Ulysses (and have since attended two Bloomsdays, when Dublin reverts to Joyce’s day and everyone ends up in Davy Byrne’s eating gorgonzola sandwiches.)

I love Ulysses, highly recommend it, but unless you have a year of leisure before your trip it’s a probably the most ambitious book about Ireland! Dubliners is just as beautiful and much more approachable.

If you’re under 40 I probably don’t need to tell you about this book (or the pretty good Netflix series either) but it’s so delightful it’s certainly worth a mention. In fact, I think it might be one of the best books set in Ireland.

Normal People follows two young Irish kids who grow into artsy, interesting adults (and who have a lot of very steamy sex together). But it’s really a novel about class, about art, about life and love.

Granted, I fall perfectly into the demographic that adores Sally Rooney (I also loved and would recommend Conversations with Friends and Beautiful World, Where Are You), but she’s an insightful and talented writer with a gift for language and peeking into the hidden corners of human nature.

Ireland is a beautiful country with a long and storied history – but some darker corners lurk as well. Edna O’Brien caused a national uproar when she published Country Girls in 1960 because it dared to expose the raging misogeny in Irish society, especially the Catholic Church, and showed women who want more from life than they were offered in Ireland just 60 years ago.

Of course, despite the outcry (and even a few book bans and burnings), O’Brien became an internationally celebrated author of some of the best books on Ireland.

The two sequels to Country Girls – Girl with Green Eyes and Girls in Their Married Bliss – are also compelling, and she wrote her autobiography in Country Girl later in life as well.

5. At Swim-Two-Birds by Flann O’Brien

Flann O’Brien (not related to Edna) (and born Brian Nolan / alias Myles na Gopaleen) is not nearly as well-known as he should be – he was a terrific Irish novelist. In fact, the best writers of his day and later (Joyce, Graham Greene, and John Updike, to name a few) though he was wildly talented.

What At Swim-Two-Birds about? Well… it’s a terribly difficult plot to describe. There’s a narrator, and a drunken writer whose creations come to life, and one bears his child, and some others put him on trial. It’s one of those books you simply need to experience if you have a love of beautiful, strange, hilariously funny literature.

O’Brien also wrote The Poor Mouth (funny but hard to translate properly from the original Gaelic, apparently) and The Three Policemen, which is even more complicated to describe but a wild and fun ride.

Books to Read Before Visiting Ireland

I hope these books about Ireland have provided some inspiration for your upcoming trip or your next vacation read! Ireland is a land full of poets and writers, so there’s plenty to explore beyond this list. Slainte!